The award is presented to those graduating seniors in the Chapter footprint who have achieved excellence on the gridiron, in the classroom, and in the community. All three criteria are weighed equally in the selection process.

"These 26 young men have persevered through an unimaginable two years," said Chapter Executive Director Jim Seavey. "With the COVID pandemic there was no guarantee they would even have football seasons, yet they remained steadfast in their resolve to play football and still managed to contribute to their schools and communities in positive ways. They have each brought great distinction to their schools, families and communities.”

​The awards were presented at the 2022 Scholar-Athlete Banquet Sunday, May 15, 2022, at the Boston-Newton Marriott.

Four members of the local football community were honored recently with major awards by the Jack Grinold/Eastern Massachusetts Chapter of the National Football Foundation during its 43rd Annual Scholar-Athlete Award Banquet.

Longtime Framingham State University Head Football Coach & Director of Athletics Tom Kelley is the 2022 recipient of the Grinold Chapter’s Ed Schluntz Contribution To Amateur Football Award. In honor of his five-plus decades of service to athletics at both the high school and collegiate levels, Bentley University Director of Athletics Emeritus Bob DeFelice has been named as the 2022 recipient of the Grinold Chapter’s Ron Burton Distinguished American Award.

The complete release is available here. 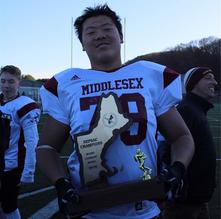 The National Football Foundation and College Hall of Fame has announced that 2022 will be a year of celebration of the 75th Anniversary of the organization. Founded in 1947 by General Douglas MacArthur and legendary Army-West Point head Coach Red Blaik, the NFF has spent the past 75 years promoting the game of football. The 75th Anniversary Logo and press release may be viewed here, and the 75th Anniversary video is available here.

Ma will attend Cornell University in the Fall.

Kevin Ma, a 2022 graduate of The Middlesex School, has been named to the 2022 National Football Foundation Team of Distinction for his efforts on the field, in the classroom and in his community. Only 82 scholar athletes form a pool of over 3,500 throughout the NFF's Chapter Network receive the honor. 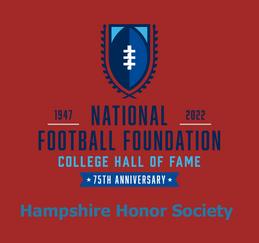 Dean, a native of Odessa, Fla., and a graduate of Hillsborough High School, completed 20-of-29 passes for career highs in passing yards (282) and passing touchdowns (four) in Harvard’s 35-28 victory at Brown, notching his first career game with three or more passing touchdowns. Dean completed 13-of-18 passes for 165 yards and three scores in the first half. Dean’s scoring strikes came from 26, 26, 17 and 81 yards in the team’s Ivy League opener.

McMillion, from Laurel, Md., and Eleanor Roosevelt High School, attended the Naval Academy Prep School before enrolling at the Academy. He carried the ball 43 times for 285 yards, both Coast Guard records, and rushed for five touchdowns in the Bears’ 66-28 victory over Anna Maria College. McMillion’s scoring runs were from 10, 11, 10, 2 and 3 yards, with a long run of 39 yards. Adding to McMillion’s totals were three receptions for an additional 55 yards.

For the eighth straight year, the Jack Grinold Eastern Massachusetts Chapter of the National Football Foundation is the presenting sponsor for both the weekly and end-of-year Gold Helmet Awards presented to student-athletes from FBS, FCS, Division II and Division III institutions throughout New England. For more information on the Gold Helmet Awards and the New England Football Writers Association, please visit www.newenglandfootballwriters.com.

Three former Grinold Chapter Scholar-Athletes are among the players named to the 2022 Class of the National Football Foundation Hampshire Honor Society.

E.J. Perry of Brown University, Evan Gwordz from MIT and Williams College's Bobby Maimaron each earned the recognition accorded to players who completed their collegiate eligibility in the 2021 season, have maintained a 3.2 grade point average on a 4.0 scale and been a starter or significant reserve during the 2021 season.